- June 02, 2012
With it being the Queens's 60th wedding anniversary and with the massive jubilee celebrations taking place in the UK I thought I would find out if I could add the domestic cat into the mix and see whether there are any royals who keep cats and if so what type of cat.

By the way, I'm going down to the Thames tomorrow to have a look at the flotilla of boats accompanying the "Royal Barge" that cost a million quid - we can't afford it, I say.

I came to a rapid conclusion that the royals of Britain are dog people. That probably would not surprise most visitors who read this (very few!). The royals are sort of upper class (actually very upper class), hunting, shooting, fishing sorts and with that kind of background you are much more likely to prefer dogs. You know...the outdoor life, country sports lifestyle with hunting dogs etc.

The Queen is famous for her Corgis and that is about all I know about the Queens's animal preferences other than her love of horse racing. She kept or still keeps some racing horses.

One person who is part of the royal family but not at the heart of it is HRH Princess Michael of Kent. She has various talents including writing and interior design. She's a cat person.

People say that she is pushy and unpleasant. I don't know her but anyone who likes cats can't be unpleasant!

She keeps cats (plural). I have seen a picture on her website with two cats. One appears to be a rich dark brown/black cat  (a moggie it seems) with a studded collar and the other is a Siamese as far as I can tell from the picture. You can see a photo on this page. 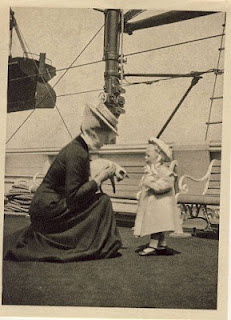 Even royals from the past usually kept dogs it seems. For example, Wallis Simpson who married King Edward VIII liked dogs. Although she owned a diamond bracelet of a panther worth £4.5 million ($7 million) in modern money.

If we go back a bit further we discover that Queen Victoria cared for two blue Persian cats. Victoria was the Queen from 1837 until her death in 1901. This was the era of the beginning of the cat fancy. Persian cats were one of the relatively few cat breeds of that time and very popular they were.

There is a picture of Princess Victoria ("Toria"), daughter of Edward VII & Queen Alexandra (1868-1935) holding a cat on the royal yacht (see picture). I don't how significant this is. It does indicate that a royal personage kept a Siamese cat. The picture was taken in about 1914.

I can find nothing else that indicates that British royalty liked and kept cats. It's a doggy family.

However Siamese royalty was different. Siam is now Thailand and the Siamese cat as you probably know originates in Thailand. At one time, it seems (cat history can be a bit vague) that the Siamese cat was confined to the Royal Palace and the King of Siam. This was clearly a special cat in Thailand in the 19th century and the King of Siam, at the time of the cat's export to the West, was a cat person.