Nevada may be the second US state to ban declawing

Cat lovers: keep your fingers and everything else crossed because Assemblywoman Susie Martinez has introduced a bill into Nevada's legislature to ban declawing across the state. New York State was the first in and they did it some time ago (2019). There are 9 cities (as I recall) who have also banned declawing. All bar one are in California. The ninth is Denver if my memory serves me correctly. 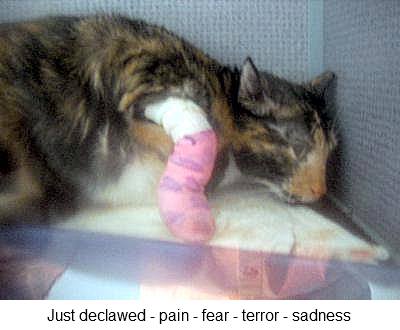 Martinez is not a cat lover but she is clearly a decent person. She regards declawing as inhumane and cruel - correct!

Her bill will be a classic declawing ban. All declawing will be prohibited except when it is in the interests of the cat's wellbeing and health, which is the way it should be if the veterinarians obeyed their damnable oath which means almost nothing.

READ ABOUT THE COMPLICATIONS OF DECLAWING. REMEMBER IT IS NOT DECLAWING. IT IS AN AMPUTATION TIMES 10.

There will be a penalty for violators: a $1,000 fine as a starting point apparently, according to the website CarsonNow.com.

The bill also provides for other penalties that the State Board of Veterinary Medical Examiners will be able to take against violators.

The vets will fight tooth and nail to block the bill's progress. They hate the thought of losing the lucrative declawing market. It is of no interest to them that it is cruel and against their oath.

The say it will be expensive to set up a tracking system and to train vets (on what? - to act decently?!) and to investigate violations.

Comment: this bill is brave. It is liable to fail. If it does she and her supporters should try again until it passes. At some time in the not too distant future declawing cats will be voluntarily stopped because it will be perceived as an outdate and inhumane process which originated in a different era, the 1950s.

The vets will realise that it will be good for business to stop declawing when the cat owning population finally understand that it is immoral and utterly unacceptable.