- May 09, 2022
This is another posting on cat coats. This time I discuss the impact of the white spotting gene on "solid" colored cats other than Tuxedo cats, which I have already discussed on this page. Tuxedo cats are very common and specific in their coat pattern so I've dealt with them separately. Both are bicolor cats meaning a cat coat of two colours, white and another solid colour.
The particular effect that the white spotting gene has on any one cat dictates the spread of white fur on the cat (or put it another way it restricts the spread of color). The cat fancy has given names to the patterns caused by this gene, which by the way is also called the piebald gene. It is considered a "semi-dominant" gene.
White spotted cats are one of the most common cats. The white spotting gene (represented by the letter "S" in the science of genetics) can change the appearance of any colored cat including tabby cats or tortoiseshell cats or a combination of the two (torbie). [See cat coats tortie and white]. When it affects a tortoiseshell cat, the cat is called a calico cat in the States.
RELATED PAGE: White spotting gene charts.

A fine example of a cat with a solid and white coat is the Turkish Van (high grade spotting - see below). This has, of course, the "Van" pattern. Van is a town in the South east of Turkey, where the Turkish Van originally came from (including adjacent regions).

I discuss, in brief, the workings of the piebald gene on the Tuxedo cat page as well as here. The effects of the piebald gene can be seen to varying degrees. The amount of white dictates whether the pattern is a grade 9 (almost total white with the colored fur limited to a few spots). This is called high grade spotting.

At the other end of the spectrum at grade 1 there is a very small amount of white. This is called low grade spotting. When the cat is low grade the genotype (genetic makeup in relation to the cat's coat) is normally heterozygous represented by the letters "Ss". Conversely when the coat is high grade (lots of white) a spotted cat is generally homozygous "SS".
The presence of the piebald gene results in white fur by causing special embryonic cells to behave in a defective manner. These cells are called "Melanoblasts" and they become the cells of the cats body that produce the granules of pigmentation that are embedded in the individual hairs. During the embryonic stage these cells migrate from the spine area. They fail to migrate properly and fully causing parts of the body to be without color. The wide variability of the effect of this gene is due, at least in part, to the presence of other unidentified genes called "polygenes".
The great Dr. Desmond Morris discusses bi-colour cats in his book Cat World. He tells us that such patterns are most common in non-pedigree cats. But of course, you will see this coat type in pedigree cats as well. It depends on the breed standard is to whether they are allowed or not. In the early days of the cat fancy the bi-colour cat was less likely to be accepted because they felt that they made a pure-bred animal look like a moggy.
This was prejudice against the coat but it was more likely to be accepted if there was some sort of distinguishing factors about the bicolour coat such as an attractive symmetry or the distribution of the colour was interesting.
In the early days of the cat fancy the black-and-white coat was referred to as a 'magpie cat'. And sometimes the bicolour cat is called a parti-colored cat. You will see "parti-colored" spelled in different ways. Apparently bicolour cats only attained championship status within the show cat fraternity in 1966.
You will see bicolour cats in longhaired and shorthaired cats and in many cat breeds such as the American Shorthair, British Shorthair, Devon Rex, Cornish Rex, Japanese bobtail, Maine Coon, Manx and Persians. These are just examples. There are others.

Here are some photographs of the solid and white coat pattern: 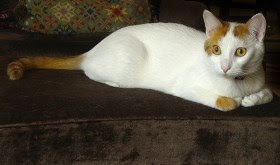 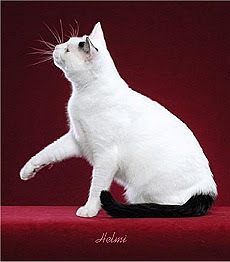 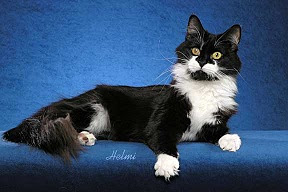 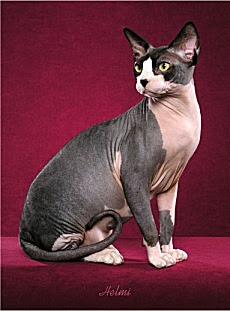 Cat Coats Solid and White - This is another black-and-white cat (hairless cat). This demonstrates how the white spotting gene affects the skin color as well. Perhaps more accurately it is the almost invisible downy hair strands near the skin which are pigmented.
RELATED: Picture of calico Sphynx cat.
Perhaps a more accurate description for this cat, a Sphynx Cat (or Sphynx-like cat) would be Black and Pink! Photograph copyright Helmi Flick.