This charming photograph is on the quora.com website on a page which discusses the photo-editing of pictures of cats. And the person who started off the discussion said that pictures of cats should never be photoshopped because cats are charming enough as it is, and they don't need to be photo edited.
And you should never add human teeth to cats which, incidentally, is something we see a lot of on the Internet. 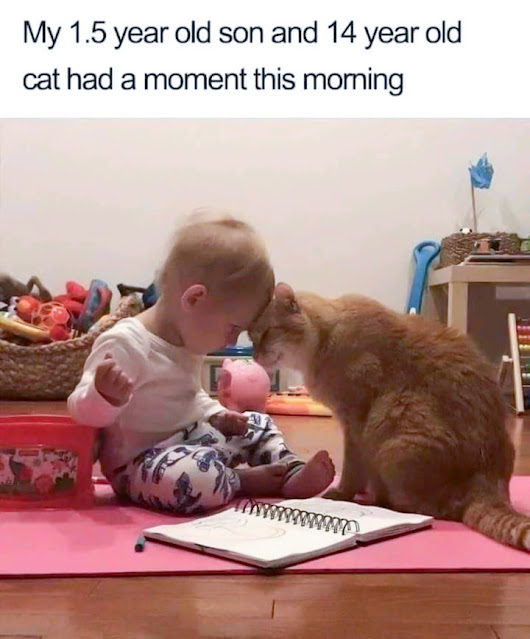 Anyway, one person who joined the conversation added a screenshot of a photograph of a 14-year-old cat head-butting an 18-month-old child and that is the photograph that you see on this page.
It is charming and it is to be expected to be honest. The ginger tabby obviously has a nice connection with this child. And he is doing what he would do with an adult person which is to scent exchange. That means he deposits his scent from the glands around his head onto the child and in doing that he receives the child's scent onto his head.
There is a metaphorical merging of minds and beings which is reassuring for him. It's a bit like saying that the child is part of his family. And as the child now smells more like him, he is part of the family.
If you click on this link blow you can read more about scent exchange.
Based on what I have read and seen on the Internet, domestic cats are curious about babies, and they often form good relationships with babies. I don't see any real danger to babies from domestic cats. There is a fear probably by some mothers that a baby might be harmed but it doesn't happen.
And there's quite a lot of work on whether a baby benefits from being in a home with a cat and indeed being close to a cat such as when sleeping with a cat on their bed at night. This is still work in progress but my reading of the science on this is that it can strengthen a child's defences against allergens.
In effect, when a baby is in a relationship with a domestic cat it desensitises them to allergens in the air for the rest of their life. But, as mentioned, the science is not entirely conclusive on this.
The feline allergen, Fel D1, is carried around the entirety of the home on cat dander, which is a kind of dandruff, but it is in fact small skin particles and bits of hair on which is dried saliva and the dried oils of sebaceous glands in the skin both of which deposit the feline allergen onto these tiny particles which are 5 µm across.
Is cat dander bad for babies?
They are so small that they can float in the air very easily and they land on bits of furniture and so on which is why a person who is allergic to cats can feel the effects of the allergy even when they are a good distance from the cat in a home where a cat resides.
Email Post
Labels: children head butt human to cat relationship pictures of cats scent exchange