In an act of enlightenment, the organisers of a campaign to encourage British women to attend a cervical cancer screening employed a picture of three cats; one hairless, one long-haired and the third shorthaired. They've equated the lack of hair or hair length on these cats to pubic hair on women and as to whether they shave or wax their hair or not. Apparently women are embarrassed to go for cervical cancer screening unless they have had their pubic hair waxed or shaved beforehand. I think that's the connection between this campaign i.e. hair length or no hair and cervical cancer. 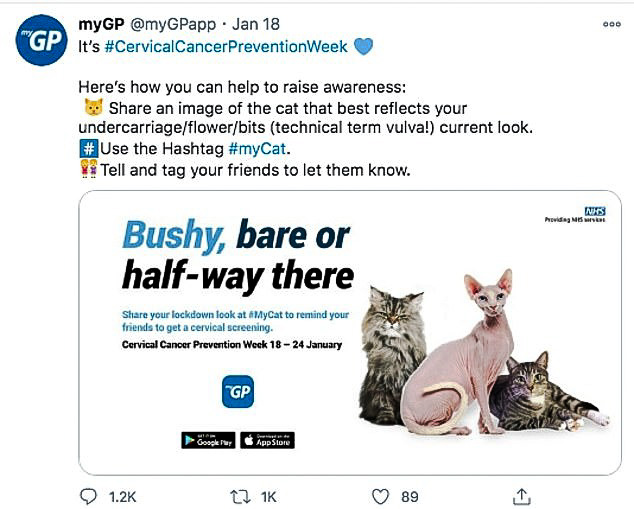 It's caused offence in some quarters of the female population while others see the benefit of it. The key aspect of this campaign is that it has got people talking about cervical cancer screening. This is the objective because it will help encourage women to go to a clinic. This will save lives.

Some women thought it was demeaning to equate cats with cervical screening. I think it is quite enlightened because it is a kind of a fusion between women's liking of domestic cats (or that is the perception) and cervical cancer. The connection comes in the amount of hair or fur people and cats have!

It's quite imaginative in that sense. My opinion is that women have been too sensitive about this campaign. The bottom line is that it gets people talking about it. Not enough women apparently are attending screening clinics and one reason is that they can't get waxed during coronavirus lockdowns because the waxing businesses are temporarily closed down because of social distancing rules. There is a connection then with the amount of pubic hair women have and cervical cancer!!

Gayle Maxwell, a cervical cancer survivor, found it amusing and laughed at it hard. She thinks any form of awareness is fantastic and found the campaign funny. Another lady thought that it was "seriously inappropriate". They thought it was making sexualised jokes about women's reproductive health. I go back to the original point: awareness. The campaign catches the eye and that equates to awareness. It is using the obsession with pictures of cats on the Internet to achieve this. Well done I say.