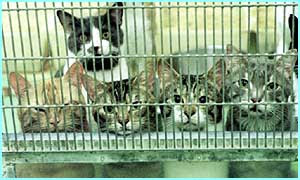 Cosmetics Animal Testing is on the way out and about time. It is obviously completely immoral to hurt our fellow creatures in the name of making people look more attractive. This behavior is indicative of the morality of some businesses, where profit is the only guide to behavior.

About 38,000 animals (at 2005 - update 23-1-08: I think this figure is wrong and too low as 2.8 million animals in the UK alone suffer from animal testing) are used in Europe every year to test cosmetics. The gradual change in attitude by some companies is due at least in part to all the peaceful activists who have actually done something. There are a lot of people who don't like animal testing to improve cosmetics and that includes a massive majority of women who use cosmetics but only a tiny handful of people actually do something. I am ashamed to say that up until now I have done very little. We can't talk about beautiful cats without doing our bit to help the "ordinary" cats who are suffering. These ordinary cats as as good as the beautiful ones.

Although I disapprove of the violent protests it may well be that it is these protests that have moved companies the most in banning cosmetics animal testing. If this is the case, it wouldn't surprise me as that is the way the world works (i.e. sometimes you've got to push extremely hard to drive some people to do the right thing). 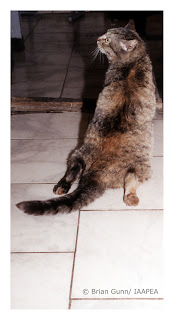 Apparently a number of major companies have changed their practices and found different ways to test their products proving that there are alternatives.

In Europe the European Parliament is debating legislation to ban cosmetics animal testing by 2009.

There is absolutely no justification for animal testing to improve cosmetics. The use of cosmetics itself could be questioned never mind killing animals to test the stuff.

At a more problematic level, it is highly questionable that animal testing to save human life is justified as it presumes that humans are worth more than other animals and that we have the right to decide if other animals die or not for potential human health benefits.

The great man Mahatma Gandhi said it well, "To my mind the life of the lamb is no less precious than that of a human being. I should be unwilling to take the life of the lamb for the sake of the human body. I hold that, the more helpless a creature, the more entitled it is to protection by man from the cruelty of man."

In any event there are alternatives that are becoming more efficient such as tissue cultures and computer models, which are cheaper as well.

One extremely large company comes to mind: Procter and Gamble ® who use animal testing. They manufacture a massive range of products and have a cosmetics branch - Procter and Gamble (Cosmetics and Fragrances) Ltd. They also make cat food under the Iams ® brand. As far as I am aware P&G admit the commissioning of animal testing or do it themselves. I am not sure if they carry out cosmetics animal testing. I understand that they are in discussion with the Human Society of the United States in an effect to improve practices. Or is this a cynical attempt at improving image?

They make products such as Max Factor® and Wells® hair products. They are the world largest consumer products company apparently.

I provide links to lists of companies in another post on this site. Click here to get to this posting (from cosmetics animal testing to animal free testing of baby products).