What value a rescue cat with FIV?

- December 22, 2017
In a world where there are too many unwanted cats at rescue centres, the FIV positive cat has less value than other adult cats. In just the same way that black cats have less value than a calico cat, for instance, and kittens have more value than adult cats. Decisions about life and death at shelters are made upon these issues. 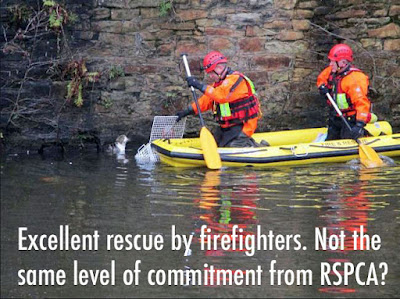 The reason why I have mention this is because I have just written a story about a rescue cat in Britain who fell into a canal in Blackburn. He was stuck on a log in the canal for two days before firefighters turned up. They did a great job. It was quite an effort to rescue him.

They handed the cat over to the RSPCA who evaluated the cat. They decided he was FIV positive. It should be said that the test to decide whether a cat is FIV positive can be inaccurate and misleading. Nonetheless, because of this test they decided that he had to be killed.

An RSPCA spokesman said that he was unable to live outside amongst feral cats because he might infect other feral cats. The chance of that happening are quite small because FIV is transmitted by a cat bite. In addition this cat appears to have been a domestic, stray cat.

I think the real reason why he had to die is because there are quite a large number of unwanted cats in the UK and as mentioned in the first paragraph each has a value and when that value is low and when you have to make a decision about euthanasia, the low value cats are killed. It shouldn't be this way quite obviously. It's a sign that domestication of the cat has gone wrong.

FIV positive cats can live good, happy lives in the right home. You have to care for them carefully to prevent infections and illnesses developing but if you do that they are normal cats and they look normal. In an ideal world this cat should have been rehomed and it could have happened. No doubt the firefighters were disheartened by the fact that all their efforts came to naught.

The point really is that the reasons why the cat was euthanised, as explained by the RSPCA, must be incorrect because this cat could have been rehomed and therefore they are making excuses.

Without wishing to be overly critical, I don't think the RSPCA should make this kind of decision because it presents to the world the wrong public relations image for their organisation. They are there to save lives and they shouldn't make excuses like this which subtly indicates a lack of commitment to that task.
cat rescue FIV rescue cats RSPCA