Julian Assange dresses up his cat in collar and tie

- December 22, 2017
This is not live, current news, not at all as it harks back to November 2016. And I am not even sure whether Julian Assange still has a domestic cat at the Ecuadorian embassy. I think he has. He was gifted him/her by a friend as a companion and I believe that his Internet access has been denied him. If this is true it would be a great loss to him. 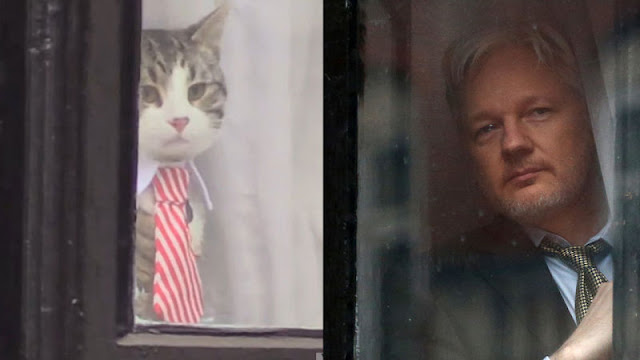 In any case, the photograph caught my eye. Either he or somebody else at the embassy is dressing up his cat companion in collar and tie. All cat lovers won't like that. It's not a good idea. It is also slightly sad, perhaps hugely sad, that his cat is confined to a very small space at the embassy because Julian Assange occupies quite a small part of it. I don't think this is right either.

I know cats sometimes live in apartments but as I understand it Julian is living in an area not much larger than the size of a bedsit or studio flat (in UK parlance) which I think is too small for any domestic cat. It really must be.