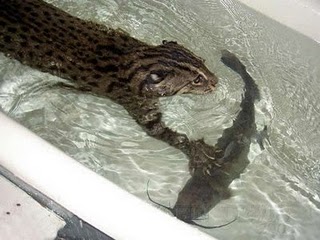 Although people might ask this question, the truth is that it doesn't need asking because, in general, it is not true. Sure, some individual cats (and cats are individuals) don't like water. This may be for any number of reasons.

If they don't like water this might be due to a personal preference of the cat owner who routinely sprays water over the cat as a form of punishment. I say, don't punish your cat as it does not work. And in any case the opposite, positive reinforcement is far better as a training process.

John Swain (Northeastern University physicist) makes a very good point. Cats are a bit like humans when it comes to liking or disliking water but we have to take into account the obvious fact that cats wash themselves with saliva and therefore don't need water. In respect of sustenance, they also get a lot of their water from their prey in the wild. The sand cat gets all the water it needs from prey - astonishing.

If a cat has been routinely bathed as a kitten he or she will be perfectly happy to be in water. I can clearly remember Kathrin Stucki of A1 Savannahs in Oklahoma placing a gorgeous Savannah kitten under the tap to wash him and the cat was perfectly at peace with the whole process. That said, Savannah cats tend to like water as is the case with Bengal cats. This is a throwback to their wild cat parents, the Serval and Asian leopard cat. Both like to hunt near water courses. You will find that wild cat hybrids generally like water, the complete opposite to the generally held opinion - see water cats for a full list.

A well known non-wildcat hybrid that actually likes water is the Turkish Van. The town of Van is near Lake Van in Turkey. Perhaps the combination of the hot weather, the proximity of the lake and this cat's long history has resulted in this domestic cat being the most adept at swimming! Interestingly, the Turkish Angora, a close relative (the same cat?) is not known to like water. Not sure about that.

That said there are a number of wild cats that like to swim and rest in water. Often these are cats in hot climates. The tiger is the best known of these. This cat, the largest of all the world's cats, has been observed swimming in the sea for 2 miles (lion vs tiger) and routinely stays in water during hot weather. However, it is fair to say that this applied to a Sumatran tiger, the smallest of all the tiger subspecies. The Siberian tiger whose habitat is in the far east of Russia, almost exclusively, will be less likely to like water - it is much colder and there is little need to wade into it.

The Jaguarundi, a small wildcat (see wild cat by size) is a good swimmer and the fishing cat definitely is! The Asian leopard cat, Jaguar and many other wildcats like water as it is a great source of food. Much small prey live in or around water in hot climates for obvious reasons.

John Swain also makes the valid point that show cats are routinely washed in a bath or showered before a show. These cats will have become habituated to this since being kittens. It cannot be said of them, "Why don't cats like water?"

In addition to the above, many cats like to play with drinking water. Some like to scoop up water in their paws and lick the water from their paw. Maine Coons do this fairly often and I saw my moggie lady cat do it the other day, using both left and right paw equally.

The conclusion is that, subject to individual cat's preferences, domestic cats that have not become accustomed to being bathed and which are not wild cat hybrids will probably balk at being washed. For all the other cats it will a matter of character (genetics) and/or experiences as a kitten, perhaps because they are wild cat hybrids or were washed all over in preparation for sale to a customer (as a purebred cat) or for whatever reason.