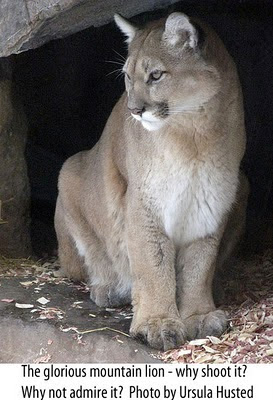 Why was a mountain lion killed in Ray County? Why oh why? For the bloody pleasure of it that is why. In this case the idiot farmer was out getting his kicks shooting raccoons. He simply had to shoot something.

Then low and behold he came across a glorious male mountain lion perching in a tree minding its own business and he shot it. Why not, nothing else to do I guess.

The cougar is almost as rare as hen's teeth in Ray County, Missouri as this state is central and most cougars have sought to escape humankind by migrating west.

There have been 3 confirmed sightings in eight years in the area so it cannot be said that this wild cat poses a threat.

It is well known that they can be dealt with without shooting them although idiot people who love to fire off their ridiculous guns will always find a well worn excuse to shoot a magnificent creature such as a large male mountain lion. Think of the kudos. The ignorant farmer can go back to his mates and proudly proclaim that he shot a fierce mountain lion - how brave. The poor cat was doing nothing!

Not matter how many clichéd excuses he makes, there is no need to shoot this increasing rare animal. There are a million different ways to deal with them and the first requirement is to leave the bloody animal alone and for God's sake grow up. See: Mountain Lion Attack.

On my reading of the law of the state of Missouri, this farmer has acted illegally. It is only legal to shoot a cougar if a person is threatened or cattle attacked. There is nothing in this report to suggest either occurred.

Of course the farmer can lie and say he was threatened which shows how idiotic the conservation laws are concerning this rare cat. The law is an open invitation to kill the cat and places no restriction upon the person whatsoever unless there are third party witnesses who are brave enough and decent enough to come forward and tell the truth - what chance of that happening?

It is no wonder the cougar and other rare wildlife is being extirpated (totally eradicated) from the United States. The US has an incredibly poor record of environmental and wildlife conservation. The story of the mountain lion killed in Ray County confirms why.

The people of Britain killed off nearly all large wild animals in England, Wales, Scotland and Northern Ireland over 100 years ago so we have a far worse record. That is just to show that although I live in the UK I do not support or criticise any one country. I try and support the truth.