Is the cat safety collar with bell a product that is fair to the cat? Now, to those people who will go ballistic reading that simple and I think reasonable question, please calm down and read on. 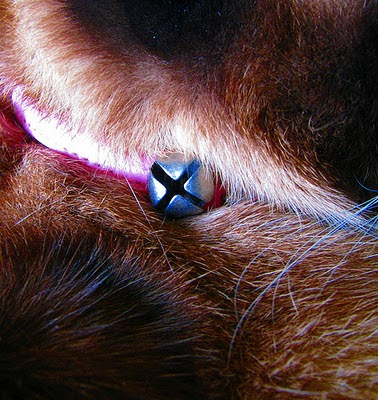 Photo by Frana Blaylock (Flickr)
The reason I ask is because the argument for putting a cat safety collar with a bell on a cat is to prevent the cat preying on what might be described by some people as native wildlife that needs to be preserved and protected. I think that that argument needs to be tested and challenged.

The first point to make is that in a study it was found that putting a collar with a bell on an outdoor or indoor/outdoor cat is effective in slowing the rate of predation.

I am referring to a study entitled: Bells reduce predation of wildlife by domestic cats (Felis catus) by Graeme D. Ruxton, Sarah Thomas and Jessica W. Wright - Institute of Biomedical and Life Sciences, Division of Environmental and Evolutionary Biology, Graham Kerr Building, University of Glasgow, Glasgow G12 8QQ, U.K. It is published by Cambridge Journals Online. I have only read the abstract as you have to buy the full document and I don't think it will add much to what I want to say.

The study found that over a four week period without a bell cats brought back to the home an average of 5.5 dead prey items. When the collar with the bell was worn the same cats over the same period brought back 2.9 items. The number of prey brought home had nearly halved (53%). An undoubtedly successful experiment if you want to stop cats behaving normally!

Update three hours later!: A study in Australia: Predation by house cats, Felis catus (L.), in Canberra, Australia. II. Factors affecting the amount of prey caught and estimates of the impact on wildlife concluded that "Nor did belling...have a significant influence on the amount of prey caught..." Well there you have it. This highlights the difficulty in achieving really solid so called "facts" through scientific studies.

On the basis that bells do curtail successful preying, should we stop our cat companion behaving normally and enjoying what comes naturally to them, if no harm is done? I am sure you would agree with that.

The only question that remains therefore is whether a domestic cat preying hurts the populations of wildlife such as birds and mammals, usually mice and rodents.

This is where things become murky and statistics from studies are used to support almost any argument so I'll simply report on a study in Bristol, England and a report by the RSPCA in the UK. Please remember that "estimates" and "projections" are essentially guesses and to be ignored.

Both support the view that wildlife populations are not harmed and in respect of birds, for example, domestic cats tend to catch the ill and dying, birds who would die anyway. Cats will always prey on the easiest animals to catch whether they are big cats such as the lion and tiger or the humble domestic cat. And mice, ground living animals are much easier to catch than fit and healthy birds.

There are the studies:
Also please see: How Feral Cats Affect Wildlife

Conclusion: lets not be too hasty in deciding to curtail our cat companion's natural behavior. We have a duty to allow our cats to behave as naturally as possible consistent with modern life and the cat's safety. Natural behavior promotes contentment. Cat contentment is our ultimate objective.