Here is a nice TikTok video of a charming young woman telling us why she wanted a cat tattoo but not of her cat. She was correctly anxious about the tattoo not being a decent likeness of her cat. That would have been too difficult to bear. So, she took a picture from Messrs Google. This makes a lot of sense to me. I am sure that it is impossible for a tattoo artist to accurately replicate the appearance of your cat. It is always going to be a failure.
To play the video please click on the center play button and then the play button lower left! 😎. Yes, I know it is a very high-tech website.
I wrote the section below in 2008, 14 years ago! The bit above has been added on June 27th 2022. I felt that the page needed to be refreshed.

Something completely different for me - picture of a cat tattoo. Cat tattoos are popular it seems. As my site is called "Pictures of Cats" it means any pictures of cats and not just photographs of cats. There is the interesting dimension of why people tattoo at all and why cats? A study of human nature is important in the study of domestic cats as the latter is dependent on the former. Here's a picture of a cat tattoo or three :) with the stories that go with them.

1. This is a picture of a cat tattoo on a women's arm photographed by Tzatziki and her copyright (she is female I think). The woman who has the tattoo is a graphic designer apparently. It is part of a bigger tattoo which the owner called The Debutante. The photograph was taken in the queue to the toilet (bathroom in the USA). It is very simple and elegant the photographer says. I agree. The photographer didn't know the person with the tattoo, but you can get to meet people in queues quite easily as it passes the time nicely. Maybe it was a party? What makes people have tattoos. There is probably a lot going on in the head that is unseen and which we can glimpse at if that person has a tattoo. I think it originates in the desire to decorate ourselves that goes back probably millions of years. Many animals are "decorated" to be more noticeable, to stand out. It is a form of exhibitionism.

2. This is a Cheshire cat on a man's leg. You've got to look closely to see that it is a Cheshire Cat. The photograph is by nats . This was taken at Disneyland. The photographer didn't know the subject and while the photograph was being taken Tinkerbell was lighting up the night sky. Tattooing may be a remnant (or a continuing need) to mark events in ones life. Two of the women's tattoos are big cats. This is a marker that they have grown from a girl to womanhood and to beware, perhaps :) Perhaps she is saying she is an individual to be taken notice of. A marker of a rite of passage from one part of her life to another. A Cheshire cat, the subject matter of the tattoo on this person, was created by Lewis Caroll. The cat smiled and asked Alice in Wonderland difficult and philosophical questions. The tattoo may be a statement about this person's character. 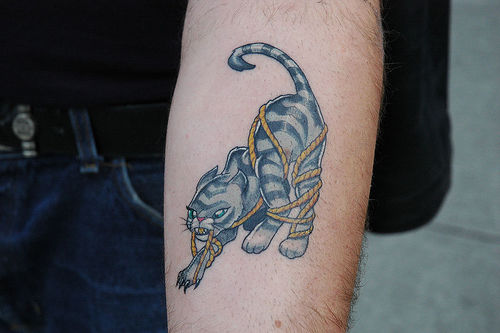 3. This is a photograph of a "bondage kitten", believe it or not. It was taken by the friend of the person with the tattoo, who said he was going to have it done and when the two bumped into each other he showed it off. This photograph was taken by gillicious My guess is that the title "bondage kitten" is just making a picture of a cat playing with string a lot more sexy for the client. 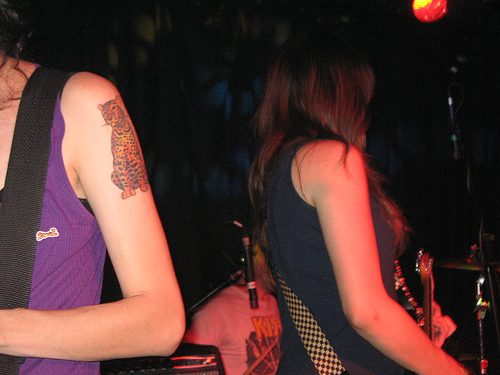 4. This is a tattoo of a big cat on the left arm of a female pop band member. Yes sir it is that....It looks like a leopard. Big cats are popular for obvious reasons. People like cats; big cats are very impressive and beautiful creatures so are good subjects for body decoration. There may also be an element of female power, women's liberation stuff here. Beauty and strength combined being the message. The photograph was taken by acb and is copyright acb. 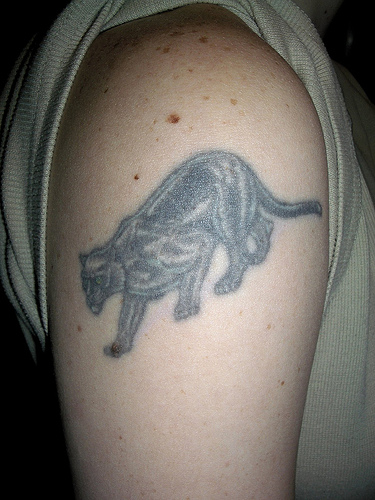 5. This is another picture of a cat tattoo. This time a big cat, a panther, on the arm of a woman. It's more woman power stuff I think. Picture is copyright and by mhaithaca Update: Picture of cat tattoo --
Here are some more added later (19th January 2009): Photo by graphic.ward - very delicate and tasteful. What do you think? 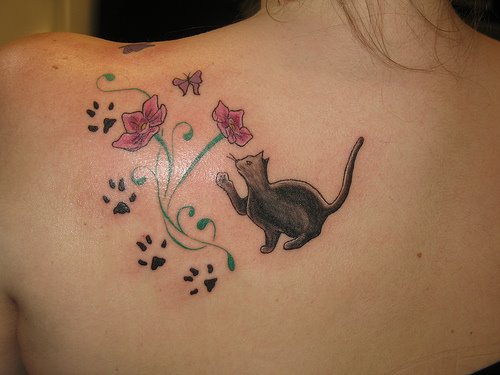 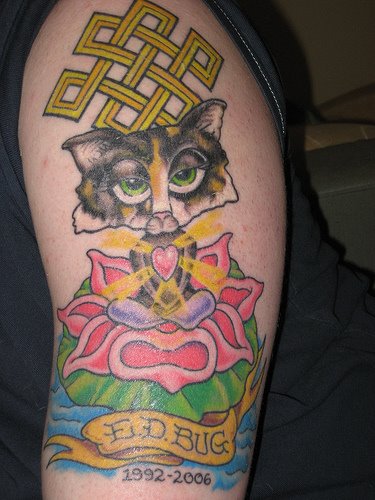 Picture of Cat Tattoo  above-- Photo by chaserpaul. This tattoo is in memory of a beloved cat that has gone over the rainbow bridge. His name was E.D. The cat tattoo was done in 3 2-hour-sittings by Dirk of East Atlanta Tattoo.
Picture of Cat Tattoo -- Risks involved in tattooing
I think a bit of information on the risks is useful to people considering a cat tattoo. As we know, a tattoo is made by piercing the skin and injecting colored ink into the skin. It can be quite painful understandably. The skin is the body's main protection against infection. Once damaged by the tattoo machine, at least potentially, there is a risk of infection. Also, the long-term effects of the dyes placed in the skin are unknown as they are unregulated. Some possible illnesses that can occur on being tattooed (these it would seem are relatively rare considering the number of tattoos carried out) are: As I said these are relatively rare but precautions including choosing a top-notch tattoo artist, I would have thought were essential as one's health is involved for the sake of decoration.