When I saw this video, I found it slightly charming but I also found it slightly disturbing because I don't think a domestic cat should be on the loose in the cabin of an aircraft. Is it allowed? Is the owner being sensible? The cat is certainly entertaining the other passengers but depending upon how the cat reacts, this could end up in disaster. What if the cat becomes scared and runs down the cabin and hides somewhere hard to get at? 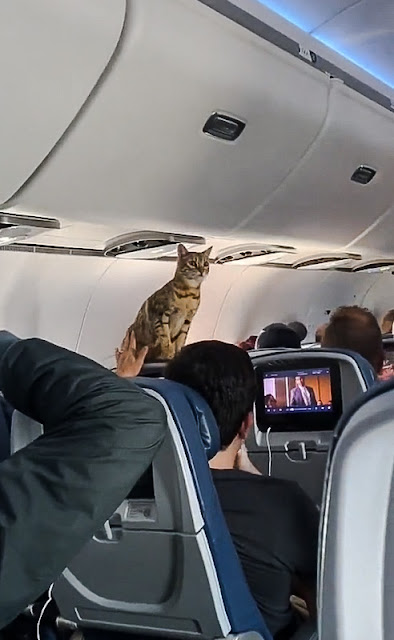 There would have to be a search and I just think it could end up in a bad way. Perhaps I'm being too negative and pessimistic but there may be a rule in any case with this airline which states that cats should be kept in a carrier under the seat when they are allowed in the cabin. Other than that, they should go in the hold.

I would really like to see some comments on this video because I am sure that some of the readers will have taken their cat on a flight in the cabin in America for instance and therefore, they have first-hand information about the pluses and minuses.

Cats on a plane. pic.twitter.com/3tSauOqIOn

Note: This is an embedded tweet. Sometimes they are deleted at source which stops them working on this site. If that has happened, I apologise but I have no control over it.
Email Post
Labels: air travel aircraft