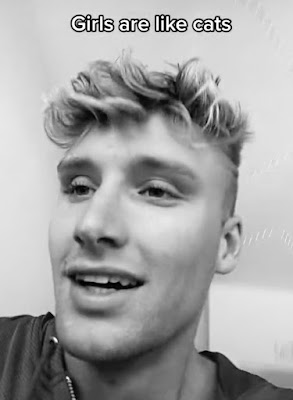 What do you think? Are these the wise words of a young man on TikTok or just a nice, convenient analogy? I don't think it is as straightforward as he makes out. It get the message but you can't pigeon hole all females in the same group in terms of their attitude towards dating and the same goes for males.

It is all depends on many things. Today in particular with the woke movement, you cannot pigeonhole all females and all males as separate groups. There is an entirely fluid group in the middle made up of members of the LGBTQIA+ community and so on.

The sexual preferences and gender of all humanity is a spectrum. You cannot compartmentalise it in the little boxes. It is far better to visualise it as a continuous spectrum. Nonetheless, I quite like this bloke's analogy which he delivers with confidence and clearly with first hand experience.

Note: to run this video, click on the center play button followed by the play button bottom-left 😎. High tech.

Although there is another error in his analogy. He says that when you pick up a cat the cat becomes pissed off. This is not necessarily correct.

If a stranger picks up a cat, she/he will likely be frightened, be pissed off and jump out of the person's hands. The person may get scratched if they resist. But often a cat will want to be picked up by their human caregiver and be given a nice cuddle.  Cats often ask for this. Mine does in the garden.

RELATED: The wild cat within the domestic cat which holds them back.

It just depends upon the circumstances and who is picking the cat up. I know I am stating common sense but it is wrong to paint all domestic cat with this behavioural trait. It ain't true. There is a general truth here about not forcing a cat to do something. That never works. It is far better to use one's intelligence and trick a cat to do something or you train them! The same applies to women 😎. The cat's 'independence' comes out when you try and force them to do things. That said the same also applies to men, don't you think?

Dr Fogle DVM says that some cat owners treat their cat as a dog (or as babies) which is not going to work very well. Dogs are far more obedient than cats.