The story concerns a dog, Kai, and I am sure that a lot of people have read about this.  The dog was left abandoned on a railway station with all the bits and pieces that a person needs to look after the dog in a suitcase.  It was the classic Paddington Bear scenario.  There was uproar as to how somebody could leave a dog on a railway station, so cruelly abandoned and the abandonment was highlighted by all the accoutrements the person needed to look after the dog being left on the railway station as well. 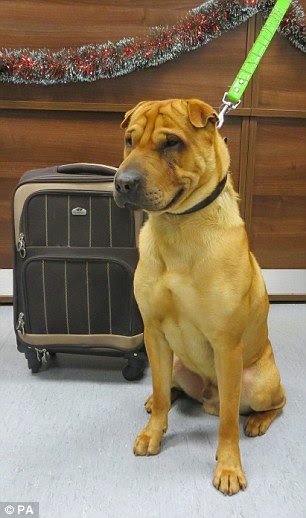 As it turns out, the story isn't a simple case of the abandonment of a domestic animal.  I believe that we can lay the blame for this act of apparent domestic animal cruelty at the feet of a commercial organisation: Gumtree.  Gumtree is a bit like Craigslist in America.  It is the American version of it.  Anybody can sell anything on Gumtree.

In this instance we discovered that a lady, Fin Rayner, had left the dog at Ayr railway station, Scotland.  What happened was she had responded to an advert for the dog on the Gumtree website; the dog had been advertised for £400.  The dog is a cross breed shar pei.


'I went to buy a dog but the dog was not the same as the picture advertised.'

When she met the seller, a man, she realised that the dog was not the same animal that she had seen advertised on Gumtree and, in addition, she noted there was a problem with the dog's eyes (probably a breeding problem). She became suspicious and, in response, the seller asked for a deposit of £150 if she wanted to take the dog for a walk.  She appears to have done that but she hadn't got far before the man disappeared with her money.

Things got worse because the dog was clearly nervous and unsettled as he was peeing everywhere.  The lady felt she had not bought the dog and having tried to call the seller to return to collect his pet without success she decided to get on the next train to Glasgow and before doing so she told a member of staff at the station that the dog belonged to somebody else. She abandoned the dog.


She said: 'He lied about the dog. I can't believe he did this....I've been shaken for days....I don't think people should sell dogs on Gumtree.'

The moral of the story is that you should not buy a dog on the Gumtree website despite the fact that there are many cats and dogs and other pets on that site.  You simply cannot be sure what you are buying.  There is not only a problem in respect of the buyer but also the animal.  Many buyers will also be unscrupulous leaving the animals exposed to abuse having been sold on perhaps for animal research or perhaps dog fight baiting.

Of course, not all sales of domestic animals on Gumtree go wrong but the whole process is simply unethical and liable to go wrong and I'm thinking of the animals more than the people.  It is disrespectful to advertise them online.

The reason why the seller wanted rid of his dog is because he/she had an eye problem requiring surgery, the price of which was £1,000. He could not afford it. A vet did the surgery for free probably organised by the Scottish SPCA.
Email Post
Labels: buying a cat buying pets online dogs Gumtree