Difference Between Leopard and Cheetah 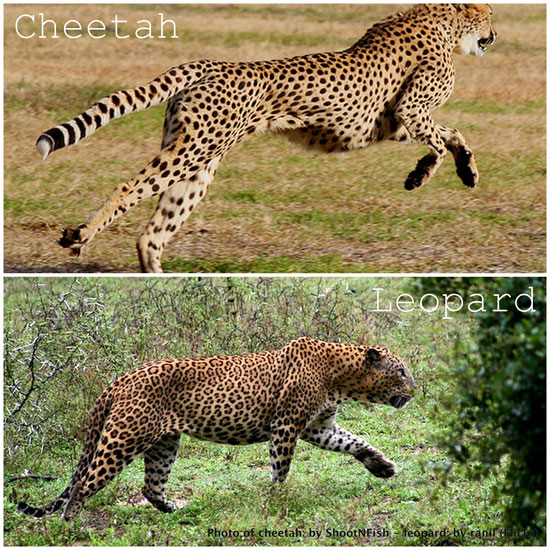 In order to fully compare the difference between the leopard and cheetah I think we need to look at the following: size and weight, appearance, prey, habitat, range and status in the wild. For the time being I have left out socialisation and reproduction and development.

There is, however, a big difference between the leopard and cheetah in appearance. The cheetah does not have the heavy, stocky, muscular body and limbs of other large wildcats. It is a slim and slender wildcat with a very supple spine and a deep chest. The cheetah is a sprinter, a greyhound-like large wildcat. The leopard is more a decathlete, more an all rounder.

The whiskers of the cheetah are short and fine compared to the leopard's cheek whiskers. Whiskers play less of a role in catching prey for the cheetah.

The cheetah "has small canines because it runs so fast". It kills by strangulation and its bite force is less than that of the leopard. The neck bite that severs the spinal cord requires greater force. The leopard employs this method of killing smaller prey and the throat bite for larger prey. The cheetah's canines are smaller than those of the leopard.

The leopard has relatively short legs compared to the cheetah. This page shows the difference between the leopard and cheetah spots.

Leopard prey is extremely wide in its range. It will kill whatever it can catch. Its diet mainly consists of small to medium-sized animals (5-45 kgs). The cheetah mostly feeds on medium sized ungulates (hooved animals) in the 20-50 kg range but most are under 40 kgs.

The cheetah chases prey and runs it down through sheer speed. The leopard's final charge is short, in contrast stalking to within 4 meters in northeastern Namibia.We know that the cheetah can run at a maximum of about 65-70 mph for short bursts while the leopard probably has a top speed of about 45-50. See cheetah speed.

The leopard has the widest distribution of all the wildcats from Africa through to eastern Asia while the cheetah is essentially found in Africa with a possible small population in Iran. See leopard habit/range and cheetah geographic range.

Due to the very wide distribution of the leopard it is found in wide range of habitats. They can live in any type of habitat except true desert. The cheetah habitat is classically the flat grassy plains of Namibia. It likes arid semi-open grassland, savanna, semi-desert and even even mountain regions.

The IUCN Red List classifies the leopard as Near Threatened while the cheetah is classified as Vulnerable. The range of classifications is as follows:

You can see that the cheetah is in a more precarious situation regarding its survival than the leopard. See a page on the IUCN Red for all wild cats.