The famous Manx cat is perhaps known to have some health problems associated with its genotype. This should not be unexpected because where there is a genetic mutation that alters the appearance of a cat it, there may be medical problems that are not immediately apparent from the appearance. 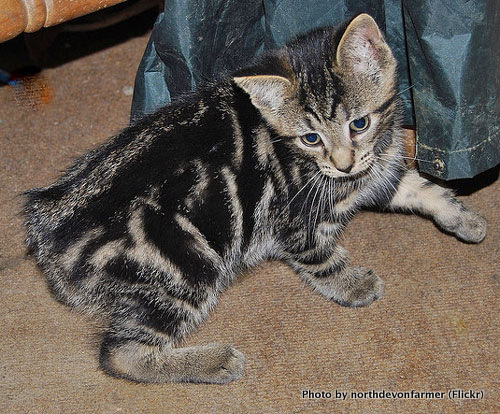 In the case of the Manx cat, when the "Manx gene" is inherited from both parents (homozygous) it results in the death of the offspring in the womb. In Manx to Manx matings 25% of the potential litter is lost in womb during fetal development.

Accordingly, in breeding the Manx you cannot breed Manx to Manx and the offspring is a heterozygote (carries one Manx gene).

The shortened tail is what we see as a consequence of the presence of the Manx gene. However, the gene affects other parts of the cat's anatomy causing Manx cat health problems (Manx Syndrome).

This is a malformation of the vertebrae and spinal cord. The neural tube (the precursor to the central nervous system in the embryo) is not fused together. Skin can cover the defect. The medical condition can result in fecal incontinence and urine incontinence (in some cats). Other health problems caused by this condition are:
Other spinal cord defects
Atresia ani

Spinal defects can lead to straining when going to the toilet which in turn can cause rectal prolapse. In layman's terms this means rectal tissue is forced to the exterior at the anus. This condition requires immediate veterinary treatment.

This Manx cat health problem "exists in an inbred line of Manx" cats.  This is an autosomal recessive trait meaning not sex linked and an inherited recessive gene causes the problem. The symptoms are central cornea edema (swelling) at four months of age and ulceration of the cornea later.

Pyoderma may affect the dimple where the tail should be. Pyoderma is a bacterial infection of the skin. The dimple should be kept clean. If it develops the hair should be trimmed and a local antibiotic (cream) applied to the area.

Some cats can suffer from arthritis. I am not sure how prevalent this is or how much more common over the average. Arthritis can affect all cats, purebred can random bred.

Although I am writing about Manx cat health problems meaning the purebred cat, it would seem reasonable to presume that these conditions can affect random bred cats affected by the Manx gene.