- July 27, 2010
Cindy Kemper, wildlife biologist and (indoor) cat lover says that "roaming cats aren't natural". That sounds like rubbish and it is rubbish. The most natural thing in the world for a cat is to roam and patrol territory.

She argues that domestic cat predation kills hundreds of millions of birds and more than a billion small animals in the USA annually. She produces not a shred of evidence to support that wild assertion, which is surprising coming from a "wildlife biologist" (see for example: Domestic Cats Don't Decimate Bird Populations)

She says that "this is unnatural predation". Her argument is that Canadian songbirds did not evolve with domestic cats as predators. Well that is a very poor argument. The domestic cat has been in North America for at least 400 years and perhaps longer. It has evolved alongside birds over that time. And the domestic cat lived side by side with songbirds in the Golden Crescent some 9,000 years ago. Before that the domestic cat was a wildcat. Surely that qualifies as evolving with songbirds and it doesn't make a jot of difference if they are Canadian or Middle Eastern songbirds.

Then she says that there are no songbirds in New Zealand because of predation by outdoor domestic cats "and other non-native mammals", whatever they are. These are wild unsupported statements that harm the domestic cat and she claims to be a cat lover!

Yes, cats are in danger if left to roam but there must be a better way than simply banging up cats all their lives. I am convinced that the domestic cat needs to be in the open air. It is entirely natural and healthy. Full-time indoor cats can be healthy too, of course, but I would bet that there are a considerable number who suffer illnesses through being full-time indoor domestic cats, one being stress related illnesses.

Cindy Kemper's thinking is narrow minded, biased and unsubstantiated. Her article damages the image of the domestic cat and encourages more to simply take the easy route and imprison their cats. A middle way must be the best, namely a decent sized cat enclosure. And at the same time we should start thinking wider and more profoundly. Is it right that we can only keep cats indoors full-time? If that is the case I don't think we should keep cats. Lets change the entire philosophy of keeping domestic cats. Lets stop finding a poor compromise as a solution which is keeping them indoors all the time and look to improve our standard of care of our companion animals at a much more profound level.

A nice cat enclosure must be the minimum requirement: 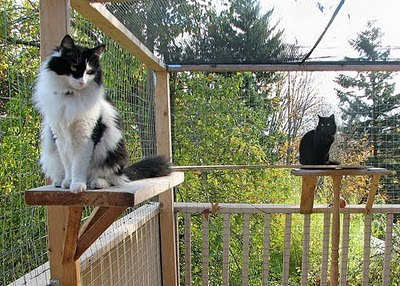