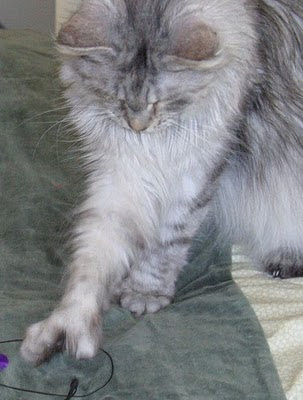 This is Tootsie, a polydactyl Maine Coon cat that lives with an American women who lives in Atlanta, Georgia, USA. Her Flickr name is valleygirl_tka

I know Valley Girl as she is a work colleague of mine, although I have never met her. She has a website called, teh kitteh antidote/anecdote. Now that is a very fancy name for a website. It took me a little while to realise that it is a play on words, mispelled words (notice I spelled "spelled" correctly!). It is also a play on mistyped words and mixed up words. Great name for a website and the title does not start with a capital letter just to add a bit of spice. Oh, I almost forgot, Valley Girl's (VG for short) website is a subdomain of my maine (mispelled) site called, Pictures of cats.org or PoC for short. A subdomain is a domain that is separate from but part of the main domain. It is a separate website but included in statistical reports such as for Alexa traffic reports. Well I think Alexa treats it as part of PoC but there is some discussion about that.

Now what about the cat and the photo? Well, the polydactyl paw looks like a hand with a thumb! And it is about to grab the handle part of a cat toy. How many cats prefer the wrong end of a cat toy? How many cats actually sleep on that cosy bed you bought him or her? I find that if I buy something for my cat she or he doesn't use it! Humans and cats have different ideas about possessions. Cats don't recognise the concept of possessions.

Tootsie is a grey cat. In fact, to me she looks like a grey tabby smoke (the smoke effect is caused by the inhibitor gene). I am guessing wildly but I think the tabby gene, the agouti gene, the dilute gene and the smoke gene are at play all at once. And of course we have the genetic mutation that produces the additional toes. Wow, there is a lot going on. Now, I could be wrong about the genes!

Polydactylism is not a genetic mutation that carries health problems as is the case with some mutations such as the short tailed Manx or the floppy eared Scottish Fold.

Ernest Hemingway kept polydactyl cats in Florida. They are still there and they are called Hemingway cats or American Polydactyl cats. This is not a breed of cat but that is a disputed point I think. Someone might like to leave a comment on that as it might clear up this point.