A Clowder of Cats in the Shade

I couldn't resist publishing this well known photograph on this Blogger site because I have just finished a post on the main site about the word "clowder" and its origins. And this picture really is of a clowder of cats in the shade. A clowder as you might know is a group of cats in one place. 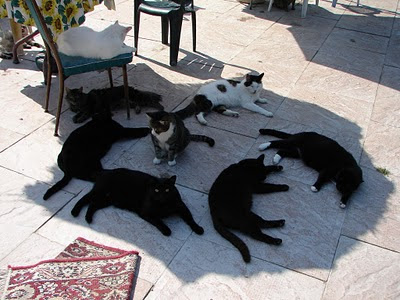 The word clowder comes from old English words such as clotter (which produced the modern word clutter) and clodder meaning a clotted mass. Well, I wouldn't quite call these cats a clotted mass, just a content group of cats seeking relief from the sun. A group of kittens in one place is called a "kindle" after the word "kendel" or "kendal" or "kyndyll". See more on the word, clowder.

The photo was taken in a cat shelter in in Richmond BC Canada.This is the 1000th post on this blog - now there is a useless piece of information.

From A Clowder of Cats in the Shade to Home Page
Email Post
Labels: cat photography cat rescue