Biofuels Are Killing the Tiger

Biofuels don't even work and they are killing the Sumatran tiger. The Sumatran tiger as you would expect lives on the island of Sumatra, which is one of the islands of Asia (another is the third largest island in the world, Borneo) that is being deforested in part to make way for plantations where biofuels are grown. 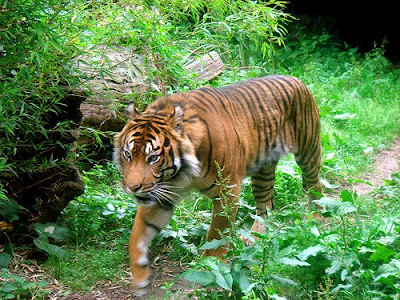 (Flickr)
Biofuels are meant to reduce carbon emissions, which in turn will help to control, over the long term, global warming. Biofuels are produced from plant matter on plantations. For example Palm oil, like other vegetable oils, can be used to create biodiesel for internal combustion engines. Biodiesel has been promoted as a renewable energy source to reduce net emissions of carbon dioxide into the atmosphere. Therefore, biodiesel is seen as a way to decrease the impact of the greenhouse effect and as a way of diversifying energy supplies to assist national energy security plans (Wikipedia authors). Palm oil is extracted from the Oil palm tree (Elaeis guineensis), which is grown on plantations.

The making of biofuels is now big business in places like Sumatra, Indonesia and Malaysia. These are Asian countries where there are dense ancient forests that are the home to tree dwelling and forest dwelling animals one of which is the Sumatran tiger, the smallest of the tigers and which is critically endangered per the IUCN Red List. Logging ancient forest to make way for biofuel plantations could be made out to be worthwhile (not for me) if it saved the planet from global warming and catastrophe but it doesn't work. The plan, the analysis call it what you like is fatally flawed so we are killing the tiger for no good reason other than to make photocopying paper, which is another reason to chop down these forests.

A recent government study has concluded that burning fossil fuels (coal or oil dug up from the ground) is better for the environment that the so-called green fuels made from plantation crops. What is cruel and totally mad is that the UK governments targets for increasing the use of biofuels (in diesel for cars, for example), will result in millions of acres of forest being logged (and some just burnt!) to make way for these plantations.

But some of the most commonly used biofuels fail to meet even the minimum sustainability standard set by the European Commission. The standard demands that one litre of biofuel should reduce emissions by at least 35% over the same amount of fossil fuel. The study concludes that the use of biofuels actually increases carbon emissions by 31%! This is because of the release of carbon into the atmosphere when forest is burnt and turned into plantations. In short the maths don't add up and we are killing the wildlife and the precious Sumatran tiger for nothing (except large profits of course). In an interesting statistic, it is said that a palm oil plantation will take 840 years to soak up the carbon released by the burning of the forest that was removed to make space for it.

The trouble now is that an industry has been built around biofuels that is worth 3 billion euros in Euros in subsidies alone in Europe. This big business will protect itself even if it is built on sand and quite pointless. One argument is that palm oil trees create another forest, which is sustainable. The rules are being changed or bent to fit into the new process mad or not.

The expansion of the palm oil business in Indonesia has turned the country into the world's third largest emitter of CO2. An area of forest the size of Wales, UK, is lost every year in Indonesia! Another precious animal that is on the brink of extinction is the orag-utan.

The world is mad and I am angry.

From Biofuels Are Killing the Tiger to Home Page
Email Post
Labels: Tiger