An unnecessarily aggressive example of human behaviour in manhandling an innocent stray cat who trespassed on Brazil's news conference in Qatar. Shame on the man. You did not have to behave this aggressively towards the cat. There is anger in your behaviour. This is a cross post from PoC as it is interesting in that is hints at the general abuse that can be directed at stray cats in Brazil.

Here is a screenshot and some words: 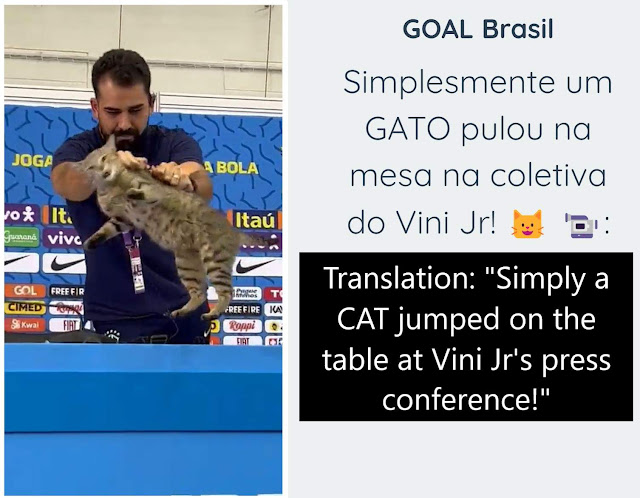 The problem is this: the man hurt the cat by grabbing the cat's skin along the spine. Also, to grab the scuff of the neck aggressively like this is not good when the cat is an adult. There is too much weight placed on the loose skin. He dumps the cat unceremoniously over the table.
The aggressive behaviour of the media official indicates a poor relationship with cats. This was a press conference at Qatar before the Brazil versus Croatia quarter final which Brazil have just lost on penalties.
Neymar scored the only goal in the first half of extra time - a great goal - and Croatia got the equalizer late in the second half of extra time. Croatia won on penalties 4-2.
Tragedy for Brazil as they were favourites. Some might say it is karma for the mild abuse meted out to this stray tabby cat who innocently wandered into the news conference.
The journalists present were aghast at the rough and aggressive behaviour of the official. PETA complained justifiably.
cat abuse Cat News cat video football news news media
Location: Qatar