- November 10, 2022
This is a slightly intriguing video. It took me about 10 seconds to realise that throughout the entire bathing of this young rescue cat (who was a bit grimy) the caregiver held the cat in her right hand by the scruff of their neck. And this accounts for the pliable and accepting behaviour of the cat.
We all know that holding a cat by the scruff helps to pacify them because they are mentally reduced to being kittens held by their mother when they are carrying their offspring from an old down to a new one. This is the 'kitten reflex response' when carried by mom.

Both images below are screenshots from the video. The video is below the images. It comes from TikTok where they allow visitors to download videos which implies that they allow them to be used under a creative commons license. 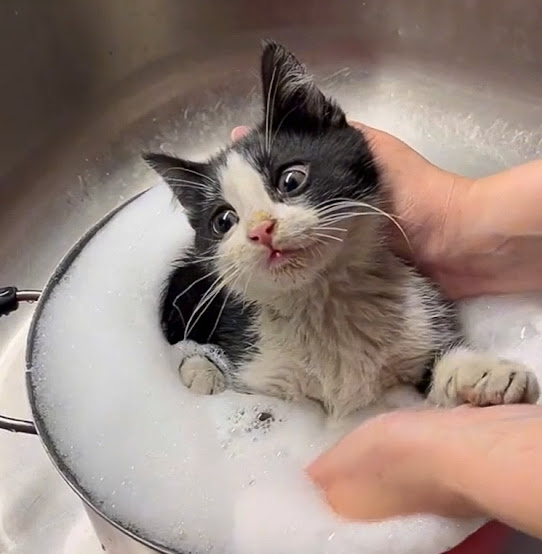 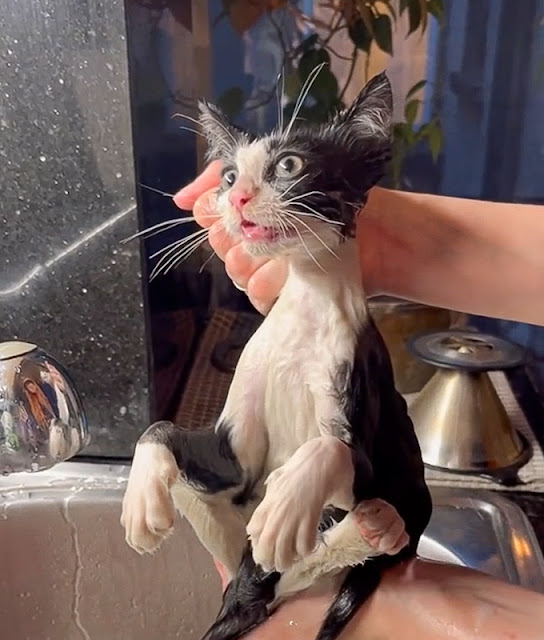 This woman has decided that the best way to bathe cats is to subdue them with the scruff-of-the-neck hold and it certainly works well as we can see in the video.

It's intriguing too that she used what appears to be a cooking pot in which I presume she added lukewarm water and some soap. On reflection, I think the reason why she used a large cooking pot is because she wanted to pour it out into the sink for the video. This allows us to see the dirt in the water. Neat idea.

How effective is bathing a cat to get rid of fleas? You are effectively trying to drown them. Can you drown fleas? The woman who bathes this cat thinks that this is an effective way to get rid of them but is it?
My research indicates that you can indeed drown fleas, but it might take 24 hours. That would be untenable while bathing a cat and therefore I think when you bathe a cat you do get rid of some fleas not by drowning but because they are washed out of the fur into the water.
Some fleas will probably remain on the cat, and they can be removed with a flea comb I would suggest. I would certainly check for fleas after bathing a cat like this especially when they are rescue cats because they are going to have lots of fleas normally.

Towards the end of the video, we see her holding this young cat up by the scruff of the neck. In fact, her hand has gone around the neck to the side. The entire weight of the cat is pulling downwards from this hold.
I would not do this for an adult cat. It is going to stress the cat's body and neck too much. But for a young cat it is acceptable. You would simply support the cat by the legs if the cat was an adult and if you wanted to use this scruff technique when bathing.
bathing cat rescue pacify scruff washing