Cat television is when domestic cats spend a lot of time looking out the window. It's a great way for a domestic cat to entertain themselves because a lot happens outside the window in terms of animals that they might chase and hunt. This cat has taken cat television to an extreme level as he rests against a Venetian blind looking very comfortable despite being precariously balanced. It's a testament to the athletic ability of the domestic cat as well as his fascination with the outside. He is probably an indoor cat.

Well, I'm sorry but the video which was published on Twitter no longer works because the person who published it on Twitter has been removed from the website. Therefore the video which was charming does not work on this site. It depicted a ginger tabby cat, the one you see in the picture below, wedging himself in between a Venetian blind and a sash window so that he could look out of it. It was athletic and a committed attempt to do a bit of feline television. That's my description and is the best I can deliver to you in lieu of the video. Once again I'm sorry. 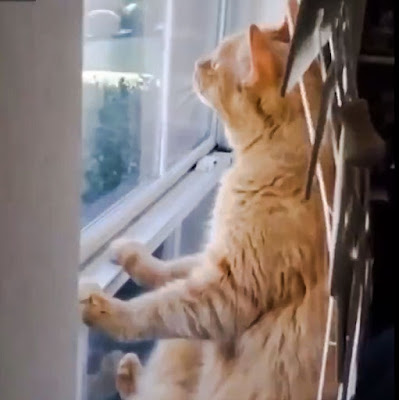