Scotland's first Minister, Nicola Sturgeon says that the coronavirus is no one's fault

How can it be that the coronavirus pandemic is no one's fault? This is what Nicola Sturgeon believes or it is what she stated before the cameras at one of her coronavirus updates to the nation. There is no rhyme nor reason why she should say this. Does she believe that the coronavirus pandemic is no one's fault? Surely it must be someone's fault? It would not have happened if the relationship between people and wild animals had been better regulated in China. This catastrophic disease would not have jumped from animals to people. 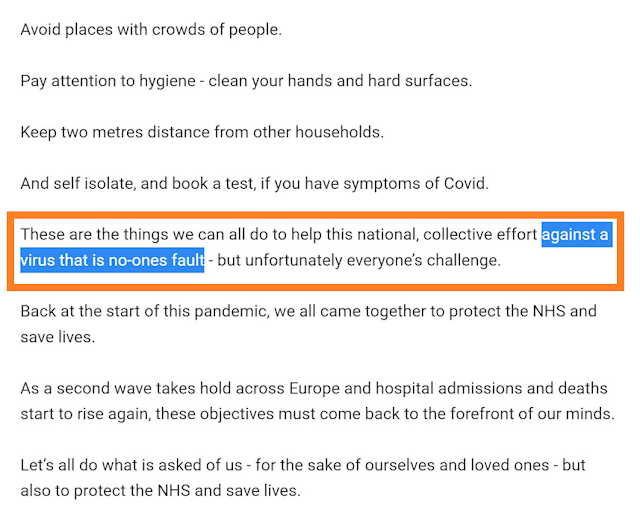 The experts state that the cause of it is abuses of nature and that abuse or mishandling to put it more kindly of nature took place in the more than 20,000 wet markets of China. These are places where wild animals are slaughtered in unhygienic places and under circumstances where the killing of animals was and probably is not properly regulated.

All the evidence points to fault being placed at the feet of the authorities who regulate how the wet food markets operate, in this case in the city of Wuhan. Clearly more evidence is needed and we may never get it because the Chinese will hide the evidence but what we have points to Covid-19, as it is now called, because transmitting from a wild animal possibly a pangolin in one of these wet markets to the human who was killing it. This released the virus to the person and other people in the wet market where it was then transmitted to other people rapidly. The disease is a zoonotic disease which is one which can be transmitted from animal to person and person to animal.

I put the blame at the feet of the Chinese government. I don't want to sound xenophobic or racist but that is where it happened and I think the world would agree with me. I will allege, and this is strictly an allegation, that Nicola Sturgeon was asked to make this very strange statement in her speech to the nation by the Chinese ambassador because he promised her investments and a possible deal if and when Scotland becomes independent or even before that. Scotland's economy is in a bad way. It was in a bad way before the pandemic and it will be worse afterward. They need help. They spend more money than they make which is what Nicola Sturgeon describes as progressive government. I'm afraid that she cannot face reality. I read somewhere that more than half the nation in Scotland do not contribute to the wealth of the nation. In other words they are takers rather than givers to the nation in terms of tax contributions. Scotland is running a big deficit year-on-year, the worst in the EU. Although they blame the UK as a whole. They are given billions under the Barnett formula which was meant to be temporary.

What has this got to do with cats? Well a lot. Cats get coronavirus. Wildcats get coronavirus. The trillions of dollars poured into trying to protect people because of the coronavirus would have been better used in conservation of the wild cat species and it would have been better used in combating climate change and many other issues regarding the natural world. Now that money will never be available. It is devastating for conservation never mind the effect that it is having on human lives.