A YouGov poll discovered that Facebook is losing its credibility or more precisely local newspapers are three times more trusted for news than social media platforms such as Facebook. 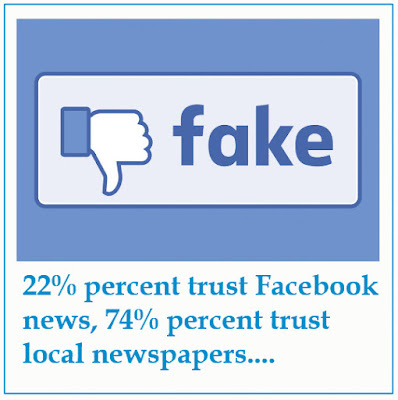 Seventy-four percent (74%) of people trust the information that they read in their local newspaper both online and in print whereas 22% trust local news presented on social media platforms such as Facebook.

It appears that the stories about fake news has made Britons skeptical about the news that they read on Facebook. Fewer than a quarter of people trust social media in contrast to 61% who trust traditional media such as newspapers and television.

This is ironic because both Facebook and Google have taken a large slice of classified revenues relied upon by local and national newspapers. The press is becoming increasingly unsustainable and the UK government is reviewing the situation because closing 200 local papers over the past decade is a threat to democracy.

I hope that this poll helps drive people away from Facebook and back to a more trusted source, the local newspaper. How does this impact the world of cats? Well, there is a lot of cat news on Facebook. A lot of cat welfare happens on Facebook. I get some of my stories from Facebook. We need to be able to trust this dominant social media platform and it appears that currently we are unable to do so.

As an aside, I should say that when I'm writing articles about the domestic cat or wild cat species I ensure that my primary sources are books written by the best authors. In this way I'm able to go to the root source of information rather than relying upon second or third hand information which is often presented on the Internet. We always need to go back to basics.
Email Post
Labels: Cat News facebook news media social media