What are Bodega Cats?

Bodega cats are store cats. They live in and around a corner store or deli or Hispanic/Spanish/Latin mini-mart in New York. They will normally be rescue cats; either rescued from the street where the store is or from a rescue centre. The term "bodega" appears to be exclusively used in New York City. 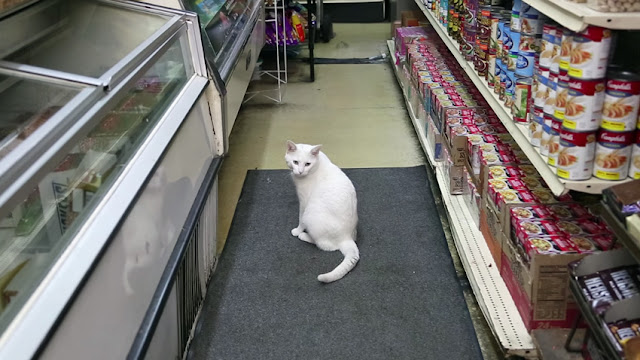 These are typical corner stores. Run independently and selling all manner of products from wine to delicatessen products. These are the sorts of shops we see all over the world. Not all of them have a live-in cat. That's obvious. The bodega cat is a very nice addition to the store. They go together nicely. It looks natural to me. And they serve a function beyond keeping the shop owner company. They keep the mice away.

In less well developed countries you could argue that the default situation regarding the domestic cat is the store cat or community cat. This is closer to the original relationship between man and cat: the barn cat keeping down rodents.

The term "bodega" comes from Spanish to mean a wine shop. The meaning has been expanded to include a mini-mart although in these stores wine, beers and spirits are an important part of the stock.

The cat in the picture is Snowball. A beautiful white bodega cat in NYC.