"Pompous Albert" Is a Purebred Haughty Version of Grumpy Cat

I think that Pompous Albert is the first purebred celebrity cat as far as I'm aware. Not only that, he is quite a rare purebred cat because he is a Selkirk Rex. Not many people look after a Selkirk Rex. They look a bit like sheep! They have this thick wavy coat and their appearance underneath the coat is somewhat like a British or American shorthair. 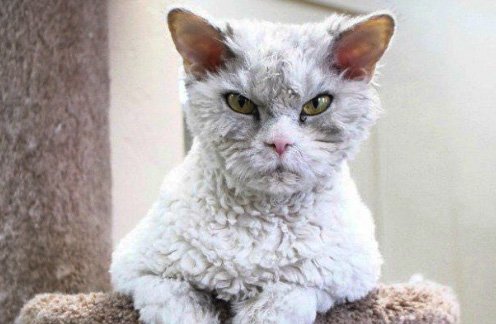 Talking about appearance, Pompous Albert, certainly has his own distinctive look which as his name indicates is pompous with a certain amount of grumpiness combined with a haughtiness resulting in a unique un-catlike appearance.

When some visitors see him they ask whether he is actually a domestic cat such is his arresting appearance. He lives with Susan and Michael Singleton of Salt Lake City. He is seven years old. His appearance has remained unchanged since the day he was born.

He spends his days in the offices of the Singletons' fine art publishing business with two cat companions. Cats are great in the workplace. He is named after Albert Einstein apparently so we will have to assume that Albert Einstein was quite pompous.

He has the grumpy cat glare, while the haughtiness comes from the upward turning eyes, I would say. The Is
eyes are marked out very nicely with heavy black eyeliner. It's more a glare actually, a glare which says he does not suffer fools gladly.

He has 30,000 followers on Instagram which is fantastic but it's a long way short of the fame of the all conquering Grumpy Cat. Grumpy Cat has earned an estimated hundred million dollars for her owner, Tabatha. We don't know the exact amount but that's a guesstimate. No cat is going to beat that ever.
Email Post
Labels: celebrities grumpy cat purebred cat Selkirk rex