Why Does a Tomcat Spray Urine On the Garden Wall? 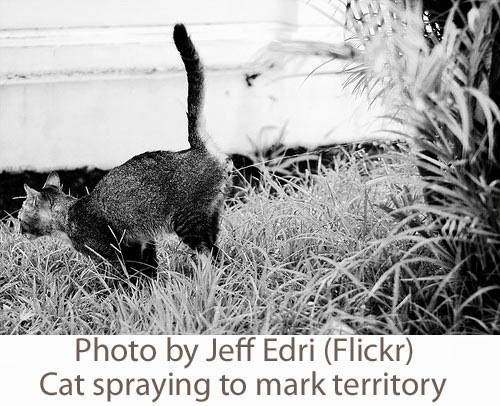 They aim their urine at tree stumps, fence posts, bushes and walls which are landmark features within that territories. Sometimes these features are at the borders of their territory and sometimes they might be at a crossroads but they would usually be in some sort of prominent area and possibly on a path or track that is used by the tomcat and other cats in the area.

The odour of a cat's urine fades gradually and the degree of fading is indicative of when it was deposited. This provides a message to a cat who sniffs it telling him or her about the movements of the cat who deposited the urine.

In short, deposited urine on vertical surfaces provides information to cats about what is going on. Apparently, the smell also carries information about the emotional state of the sprayer and the individual's identity so there is some variation in the smell between cats. A sprayer in effect leaves a calling card and leaves a message to other cats who pass by.

It makes no difference to the act of spraying whether a cat wants to urinate or not. Urination and spraying are quite separate behaviours. You will even see cats that have no urine still going through the motions of spraying and marking territory even though no urine is actually involved.

Neutering both male and female cats reduces the incidence of spraying but may not eliminate it. Personally, my cats have never sprayed. The other day, I saw a Siamese cat outside my flat spraying  onto a bush next to a flowerbed. It is the area where the Siamese cat likes to frequent and to urinate and defecate. Clearly, another cat had visited the area and the Siamese cat was just topping up the marker to make sure that her message was loud and clear.
Email Post
Labels: cat territory Neutering Cats spraying tomcat