June 13, 2010
This is a picture of male serval Morpheus looking inquisitively at me. The picture is in fact a bit misleading as he was probably figuring out how he was going to spray urine all over me. This he did not long after this photograph was taken. 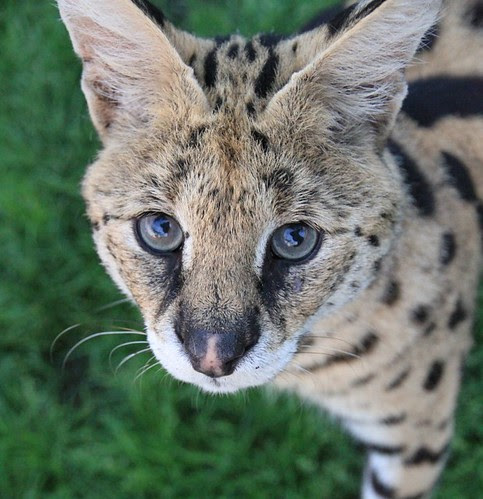 As mentioned, his name is Morpheus and despite looking rather sweet in this photograph, when I was with him in his enclosure I cannot say that he behaved in a particularly sweet way.

That is not to criticise him. He behaved exactly as I would expect a wildcat to behave towards a human who he is unfamiliar with. He was a bit hostile and wanted to make me smell more like him! And it was pretty well impossible to avoid his spraying particularly as I was fully occupied trying to tease him into position and photograph him at the same time.

Decent compositions and interesting expressions were extremely fleeting. On one occasion I placed by cat tease (a feather attached to the end of a flexible stick) to close to him and he caught me with his front claws. I felt that.

Morpheus lives in an enclosure with his girlfriend or spouse. They are breeding serval cats. There is a market for servals in the United States, which is where Morpheus lives.

Breeders want to buy servals for breeding and individuals want to keep them as domestic cats.

Servals, however, are not great domestic cats in my opinion. They are too large and too wild no matter how well domesticated they might be. They also spray as I have mentioned.

I don't see the point of keeping a serval as a pet. Many people in America will disagree with me, which is fine. Although I was relaxed and got on well with Morpheus in his enclosure, he was a bit intimidating. If that is the normal feeling one gets when close to a serval I don't see how a relationship with one can be ideal. 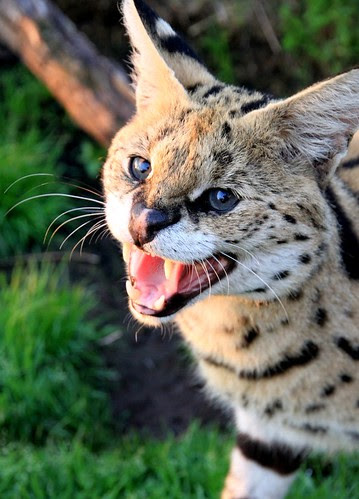